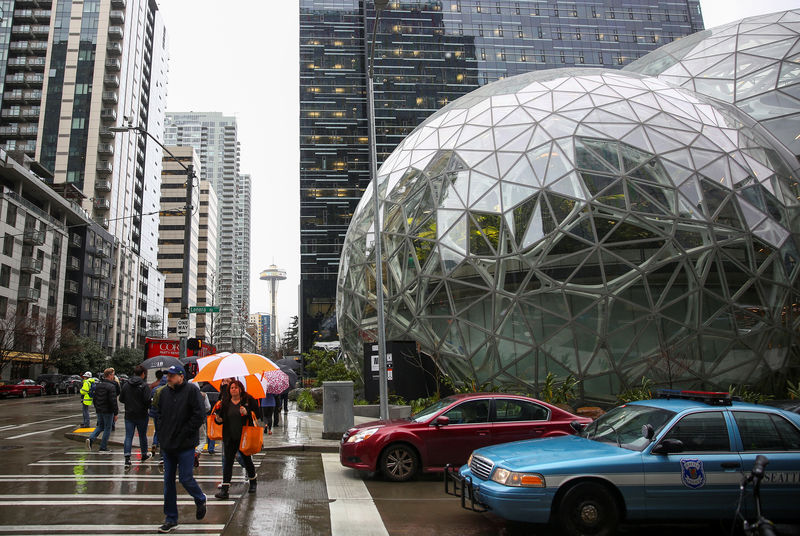 © Reuters. The Amazon Spheres are seen from Lenora Street, the Space Needle in the background, at AmazonÕs Seattle headquarters in Seattle

(Reuters) – Amazon.com Inc (O:) is in late-stage talks with Dallas, New York, the Crystal City area of northern Virginia and a few other candidates for the location of its second headquarters, the Wall Street Journal reported on Sunday.

Talks with the leading contenders are likely in different phases, while discussions with some of the others on Amazon’s shortlist have cooled, the newspaper reported, citing people familiar with the matter.

The world’s largest retailer may announce plans to place smaller operations in cities that come in as runner-ups, sources told the WSJ.

Seattle-based Amazon is in talks with JBG Smith Properties (N:) about the real estate it owns in Crystal City, while negotiating with Virginia officials on incentives, the report said.

Amazon’s final decision could be announced this month, the WSJ reported.

The retailer previously announced 20 finalists in North America for its planned investment of $5 billion and 50,000 jobs.

In September, Amazon founder and Chief Executive Jeff Bezos said the company would announce a decision on where it would build a second headquarters before the end of the year.

Amazon did not immediately respond to Reuters’ request for comment.