The news sent Apple shares jumping nearly 4% in after-hours trading on the stock market today. During the regular session, Apple rose 2.3% to 169.10. It has been forming a flat base for the past eight weeks with a buy point of 183.60. However, Apple stock has been laggard against the S&P 500 during the past year.

As expected, Apple announced a big increase to its capital return program thanks to repatriated foreign profits. The company approved a new $100 billion share repurchase authorization and increased its quarterly dividend by 16% to 73 cents a share.

The company said it will complete the execution of its previous $210 billion share repurchase authorization during the third fiscal quarter.

“With the greater flexibility we now have from access to our global cash, we can more efficiently invest in our U.S. operations and work toward a more optimal capital structure,” Apple Chief Financial Officer Luca Maestri said in a news release. 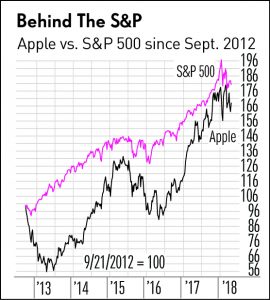 For the current quarter, Apple expects to generate revenue of $52.5 billion, based on the midpoint of its guidance. It did not give a target for earnings per share. Wall Street was modeling Apple to earn $2.16 a share on sales of $52 billion.

“Customers chose iPhone X more than any other iPhone each week in the March quarter, just as they did following its launch in the December quarter,” Cook said in a statement. “We also grew revenue in all of our geographic segments, with over 20% growth in Greater China and Japan.”

He noted strong revenue growth in iPhone, services and wearables.