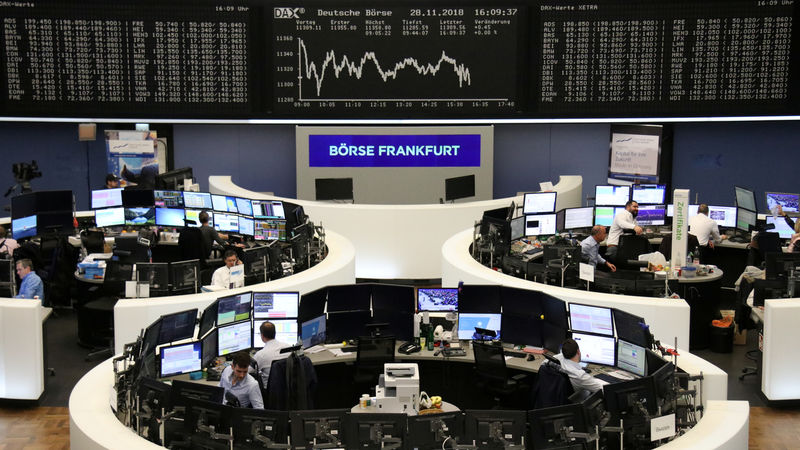 The pan-European STOXX 600 () opened marginally up but rapidly fell into negative territory, down 0.5 percent by 0930 GMT. Germany’s DAX (), the most sensitive to China due to its big exporters, fell 0.6 percent.

Investors’ hopes of a partial recovery in stock markets in December – known as a “Santa rally” – hang on the leaders’ discussions resulting in a truce or de-escalation of the U.S.-China trade war.

“There are only two people in the world that can deliver a Santa rally, Trump and Xi, and I don’t see that happening,” said Peter Garnry, head of equity strategy at Saxo Bank in Copenhagen.

Garnry saw a 60 to 65 percent chance of the Trump-Xi talks resulting in “no deal”.

China reported its weakest factory growth in more than two years on Friday, reigniting fears about growth ahead of crucial trade talks.

“The weak data out of China is increasingly a little bit of a surprise. Most investors would have anticipated that at least some of that stimulus six months ago would have had an impact, but this really tells us how big the headwinds are,” said Garnry.

Autos stocks () were the worst-performing, down 1.4 percent, on the data and anxiety over tariffs.

Car parts makers were among the worst-performing stocks, with Hella (DE:), Valeo (PA:), and tire maker Faurecia (PA:) down 2.4 to 4.9 percent.

“The problem with Europe is that… quite a lot of our industrial supply chain and capital goods manufacturers have at least some exposure to the autos sector, so you can’t get away from it,” said Ian Ormiston, European smaller companies fund manager at Merian Global Investors.

HSBC analysts downgraded both Faurecia and Daimler to “reduce” from “hold”, saying a re-rating for the sector next year is “hard to imagine”. Tariff fears have led analysts to slash their earnings growth forecasts for the sector.

Among the biggest drags on the STOXX were also luxury goods conglomerates Kering (PA:) and LVMH (PA:), down 1.8 percent each. Luxury stocks have been especially sensitive to slowing growth in China, high-end brands’ biggest market.

In single-stock moves Altice (AS:) shares surged 9.4 percent after the telecoms and cable firm announced its French unit had agreed to sell a 49.99 percent stake in its fiber optic business.

Zalando (DE:) fell 4.2 percent after Kepler Cheuvreux cut its price target on the stock, saying it has become more skeptical about the long-term potential for margins at the online retailer.