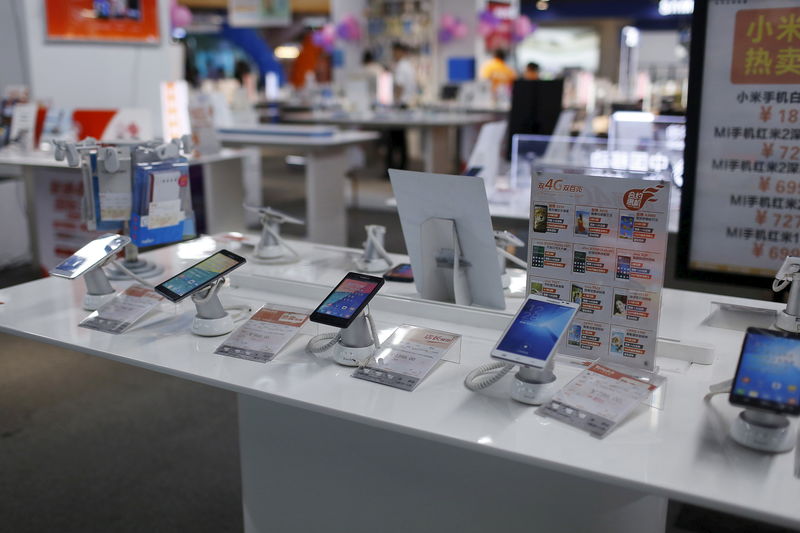 © Reuters. Mobile phones are seen on display at an electronics market in Shanghai

China Academy of Information and Communications Technology (CAICT), a research institute under the country’s Ministry of Industry and Information Technology, said shipments dropped 15.5 percent to roughly 390 million units for the year, with a 17 percent slump in December.

Market research firm Canalys estimates shipments fell 12 percent in China last year and expects smartphone shipments in 2019 to dip below 400 million for the first time since 2014.

The Chinese smartphone market, the world’s largest, could shrink another 3 percent this year, Canalys said, in what would be a third straight year of declines. Smartphone shipments in the country had fallen 4 percent in 2017.

Shipments are the number of smartphones that manufacturers deliver to retailers and carriers, different from sales that happen when customers actually buy these smartphones.

The plunge in Chinese shipments expected in 2018 could lead to a 1 percent contraction in the global smartphone market, Canalys said.

China boasts the world’s biggest smartphone market, but a slowing economy, exacerbated by a trade war with the United States, has seen demand for gadgets drop across the tech sector.

TuanAnh Nguyen, a Singapore-based analyst for Canalys, told Reuters that China was now a fully mature market and lengthening refresh cycles for smartphones would be the new normal.

“Weaker economic growth and lower consumer confidence will likely hit the premium segment well into the first half of 2019,” Nguyen said.

“Apple certainly was the biggest victim of this trend, with added effects from the fact that it’s lagging behind local competitors in innovation and attractive pricing,” he said.

Apple rival and supplier Samsung on Tuesday estimated that its fourth-quarter earnings plunged 29 percent and that profitability would remain subdued in the current quarter due to weak demand for its memory chips.

Also, Samsung’s display business is struggling due to the lack of growth of its own devices as well as worse-than-expected performance of Apple’s X/XS/XS Max iPhone series, Nguyen said.

Chinese firms Huawei and Xiaomi are challenging Samsung’s dominance in many key markets, he added.

Samsung controls over a fifth of the global market, followed by Huawei, which has a 14-percent market share, Canalys said.