Details of the Deal

Valued at $81 million, the contract was awarded by the Naval Air Systems Command, Patuxent River, MD. Per the terms of the agreement, the spare parts to be supplied by Lockheed Martin include afloat spares packages, Marine Corps quick engine change kits and associated consumables. This deal will support the air vehicle delivery schedules for Navy and Marine Corps.

The majority of the work will be carried out in Fort Worth, TX; El Segundo and Torrance, CA; Owego, NY; Samlesbury, United Kingdom; Cheltenham, United Kingdom and Nashua, NH. The company will utilize fiscal 2018 aircraft procurement (Navy and Marine Corps) funds to finance the contract.

F-35 Lightning is a supersonic, multi-role fighter jet, which represents a quantum leap in air-dominance capability, offering enhanced lethality and survivability in hostile, anti-access airspace environments. Its advanced stealth allows pilots to penetrate into areas without being detected by enemy radars. It is being used by the defense forces of the United States and 11 other nations, worldwide, largely due to its advanced stealth, integrated avionics, sensor fusion, superior logistics support and powerful integrated sensors capabilities.

Moreover, production of F-35 is expected to rise in the years ahead, given the U.S. government’s current inventory objective of 2,456 aircraft for the Air Force, Marine Corps and Navy along with commitments from the company’s current eight international partners, overseas customers and rising global demand.

Furthermore, the fiscal 2019 defense budget, which was approved by the U.S. Senate in June 2018, provisioned for a spending plan of $21.7 billion on aircraft. Specifically, the new budget includes an allotment of $10.7 billion along with additional funding for the procurement of 97 Lockheed Martin’s F-35 Joint Strike Fighters. Evidently, these projections and recent developments reflect solid growth prospects for Lockheed Martin’s F-35 program going ahead, which, in turn, are likely to boost the company’s profit margin.

Lockheed Martin’s stock has gained about 6.5% in the past year compared with the industry’s growth of 22.1%. The underperformance may be due to intense competition that the company faces in the aerospace-defense space for its broad portfolio of products and services, both domestically as well as internationally. 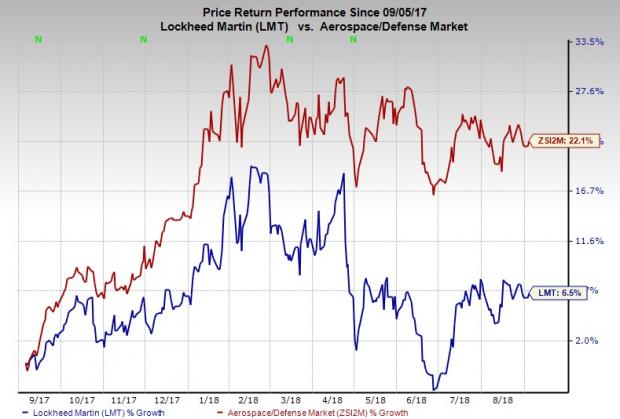 Aerojet Rocketdyne came up with an average positive earnings surprise of 9.27% in the last four quarters. The Zacks Consensus Estimate for 2018 earnings has risen 30.9% to $1.27 in the past 90 days.

Engility Holdings delivered an average positive earnings surprise of 19% in the last four quarters. The Zacks Consensus Estimate for 2018 earnings has risen 16.8% to $2.02 in the past 90 days.

Huntington Ingalls Industries came up with an average positive earnings surprise of 9.48% in the last four quarters. The Zacks Consensus Estimate for 2018 earnings has risen 3.7% to $17.24 in the past 90 days.

Looking for Stocks with Skyrocketing Upside?

Zacks has just released a Special Report on the booming investment opportunities of legal marijuana.

Ignited by new referendums and legislation, this industry is expected to blast from an already robust $6.7 billion to $20.2 billion in 2021. Early investors stand to make a killing, but you have to be ready to act and know just where to look.