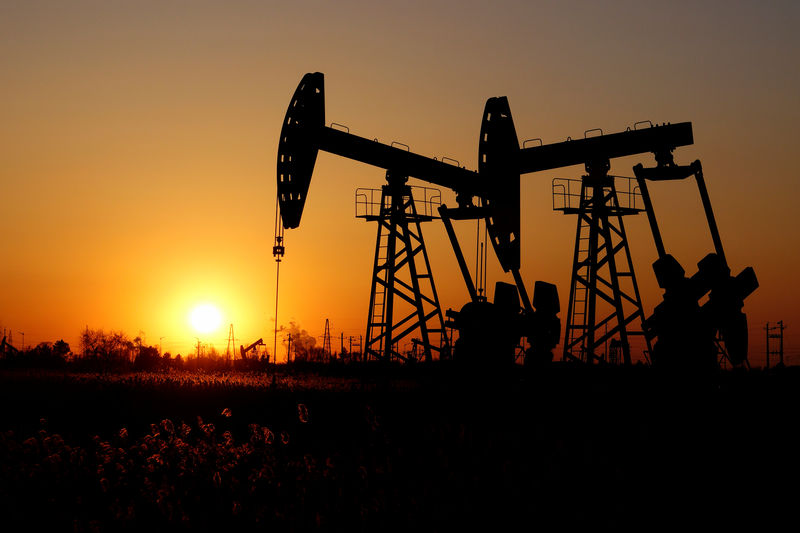 © Reuters. Pumpjacks are seen against the setting sun at the Daqing oil field in Heilongjiang

SINGAPORE (Reuters) – Oil prices fell on Monday after U.S. energy firms added rigs for the first time this year in a sign that crude production there may rise further, and as China, the world’s second-largest oil user, reported additional signs of an economic slowdown.

In a sign that output could rise further, U.S. energy firms last week raised the number of rigs looking for new oil for the first time in 2019 to 862, an additional 10 rigs, Baker Hughes energy services firm said in its weekly report on Friday.

Beyond oil supply, a key question for this year will be demand growth.

Oil consumption has been increasing steadily, likely averaging above 100 million bpd for the first time ever in 2019, driven largely by a boom in China.

However, an economic slowdown amid a trade dispute between Washington and Beijing is weighing on fuel demand-growth expectations.

Earnings at China’s industrial firms shrank for a second straight month in December on falling prices and sluggish factory activity, piling more pressure on the world’s second-largest economy, which reported the slowest pace of growth last year since 1990.

China is trying to stem the slowdown with aggressive fiscal stimulus measures.

But there are concerns that these measures may not have the desired effect as China’s economy is already laden with massive debt and some of the bigger government spending measures may be of little real use.

The increased U.S. supply, the country is now the world’s largest producer, and the economic slowdown are weighing on the oil price outlook.

However, Tortoise added that oil prices would be supported above $50 per barrel as it was “very clear that Saudi Arabia will no longer be willing to accept these lower oil prices”.