Patterson-UTI Energy, Inc.’s PTEN share price movement has been weak, both in absolute and relative terms. Patterson-UTI’s shares have plunged 22.2% on a year-to-date basis, underperforming the industry’s 3.9% decline. 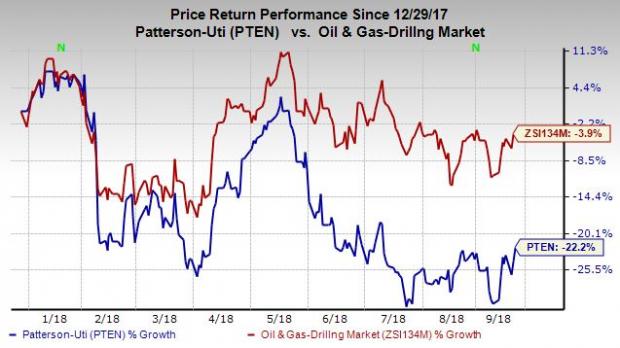 The Texas-based energy company failed to impress investors this year, as it delivered weaker-than-expected earnings in the first two quarters. Let’s take a look at the factors responsible for the dismal price performance and results of the company.

As we know, while crude production has been reaching new records courtesy of oil strength, pipeline capacity is not increasing in proportion. Infrastructural bottlenecks, especially in North America’s hottest shale play, Permian Basin, are forcing producers to lower their spending capacities as well as output levels of late. In fact, the oversupply scenario is not just limited to the Permian Basin. Prospects of the hydraulic fracturing market do not look bright, with producers suspending the completion of wells. With upstream players slowing down their spending levels and production, Patterson’s pressure pumping unit has been badly hit.

Patterson-UTI’s earnings and revenues in the second quarter lagged expectations on sluggish pressure pumping operations, with segment margins being dragged down by oversupply and operational delays. With the fracturing market becoming saturated, it has decided to temporarily stop the deployment of new pressure pumping fleet. In fact, the company has already warned investors that the pressure pumping business is expected to face weak industry conditions in the short term due to oversupply.

Weak market sentiment and lower utilization, with respect to pressure pumping, are expected to persist throughout 2018 and result in Patterson-UTI’s share price drop. The company expects revenues and margins from its pressure pumping unit to decrease 5% and 7.5%, respectively.

Patterson-UTI is also bearing the brunt of increasing costs, which are affecting its earnings and financials. In the second quarter, Patterson-UTI incurred direct operating expenses of $621.8 million, reflecting a 45.55% jump from $427.2 million reported in the year-ago quarter. Its balance sheet appears to be quite fragile, with current cash position of $242 million, weakening from $304.3 million at the end of the first quarter.

The Zacks Consensus Estimate for third-quarter and full-year 2018 earnings has moved 433% and 215% south, respectively, over the past 60 days. The unfavorable earnings estimate revisions are reflective of investors’ pessimism surrounding the stock.

Notably, the company also has a dismal earnings history, missing estimates in three out of the trailing four quarters, with an average negative earnings surprise of 30.48%.

Stocks That Warrant a Look

Petrobras is the largest integrated energy firm in Brazil and one of the major players in Latin America. It pulled off an average positive earnings surprise of 10.4% in the last four quarters.

TC Pipelines purchases, owns and actively participates in the management of U.S.-based natural gas pipelines and related assets. The company delivered an average positive earnings surprise of 3.7% in the last four quarters.

Will You Make a Fortune on the Shift to Electric Cars?

Here’s another stock idea to consider. Much like petroleum 150 years ago, lithium power may soon shake the world, creating millionaires and reshaping geo-politics. Soon electric vehicles (EVs) may be cheaper than gas guzzlers. Some are already reaching 265 miles on a single charge.

With battery prices plummeting and charging stations set to multiply, one company stands out as the #1 stock to buy according to Zacks research.

It’s not the one you think.