Rouhani says U.S. isolated on Iran sanctions, even among allies 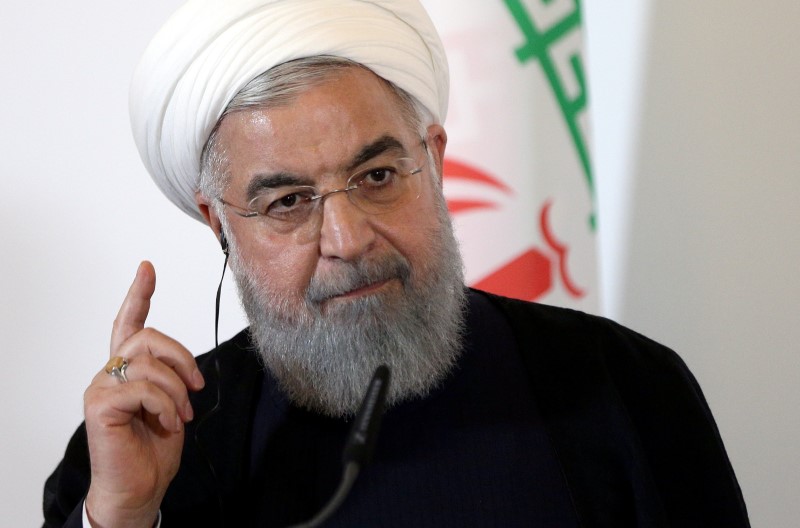 DUBAI (Reuters) – Iranian President Hassan Rouhani said on Saturday the United States was more isolated than ever over sanctions against Iran, even among its allies.

Rouhani, in remarks carried live on state television, spoke after meeting the heads of parliament and the judiciary. He appeared to be trying to ease popular concerns fueled by U.S. President Donald Trump’s decision to withdraw from world powers’ 2015 deal with Iran on its nuclear program.

The likely return of U.S. economic sanctions has triggered a rapid fall of Iran’s currency and protests by bazaar traders usually loyal to the Islamist rulers.

“Today, we are in conditions in which the United States is more isolated than ever over the sanctions issue. America’s illegal actions … have even isolated it among its own allies as we just saw,” Rouhani said, referring to protests held in Britain against Trump’s visit there.

“The government pledges to the people that there will be no problems for the country in terms of energy, transportation, basic goods and production,” Rouhani said.

The Guardian Council ruled that, based on Iran’s constitution, such legal amendments should be proposed by the judiciary and not parliament, IRNA said.

If parliament insists on its proposal, the issue can be decided by the Expediency Council which can rule in disputes between parliament and the Guardian Council.

Iran has been trying to implement standards set by the Financial Action Task Force (FATF), a global group of government anti-money-laundering (AML) and counter financing of terrorism regimes (CFT), in the hope it will be removed from a blacklist that makes some foreign investors reluctant to deal with it.

In late June, FATF said Iran had until October to complete the reforms or face consequences that could further deter investors from the country, which is already faces a likely return of U.S. sanctions.

Hardliners in parliament have opposed passing legislation towards compliance with FATF standards, arguing it could hamper Iranian financial support for allies such as Lebanon’s Hezbollah, which the United States has classified as a terrorist organization.

Supreme Leader Ayatollah Ali Khamenei said in June parliament should pass legislation to combat money laundering according to its own criteria. Khamenei’s advice makes it less likely that parliament would use FATF criteria. Foreign businesses say a bill that includes FATF guidelines is essential if they are to increase investment.