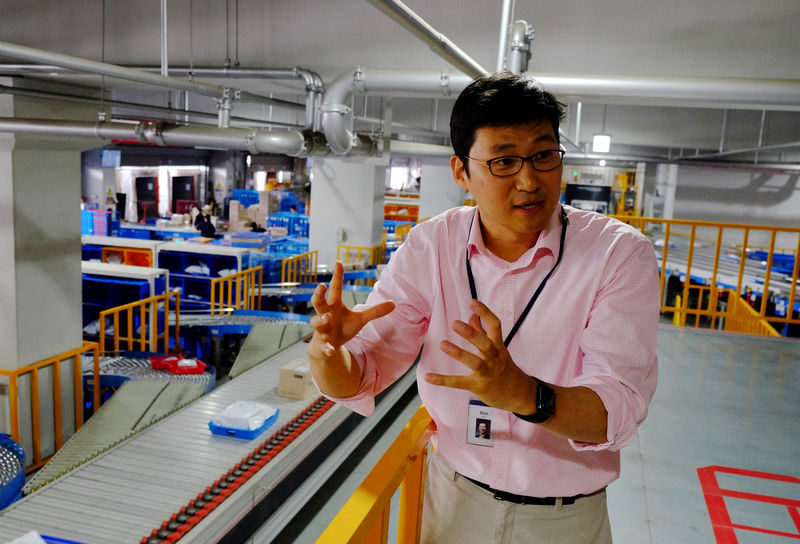 © Reuters. Bom Kim, CEO of the e-commerce retailer Coupang, speaks at a warehouse in Seoul

By Josh Smith and Heekyong Yang

The latest investment follows the $1 billion that SoftBank invested in Coupang in 2015 and values the eight-year-old startup at around $9 billion, a source close to Coupang said.

Coupang has since grown rapidly to become a major player in the country’s e-commerce market. It clocked 2.7 trillion won ($2.4 billion) in revenue last year, with its online sales almost as much as the next three largest e-commerce sites in the country combined, according to research firm Statista.

But it has also suffered large losses, totaling 1.9 trillion won over the past five years, as it poured money into building new technology and its logistics infrastructure.

“The $2 billion we are receiving now is exciting, because we can invest in more technology platforms that enable this innovation,” Coupang founder and chief executive Bom Kim told Reuters.

In the race to differentiate itself in a market that delivery companies and big conglomerates are thronging, Coupang has moved beyond being just a website and a collection of warehouses by pouring resources into building up a huge delivery network.

It also made a splash with its ‘Rocket Delivery’ service that promises delivery within 24 hours, as well as the more recent “Dawn Delivery” service.

“The reason we were able to do that in such a short period of time is because of that technology investment we made over the years,” Kim said.

Coupang says its revenue has doubled in the past year and is now approaching $5 billion in 2018.

But the losses incurred in building out that large infrastructure and workforce have raised questions about whether Coupang can compete long-term, especially against more established players like E-Mart and Lotte.

Reflecting the ballooning losses, the $1 billion previous investment by SoftBank was marked down by 30 percent to $700 million when it transferred the Coupang stake to the Vision Fund this year.

For SoftBank and its $98 billion Vision Fund, Coupang marks another significant investment in a loss-making startup, as they seek to put a huge pool of capital to work and earn an attractive enough return.

“We believe the company is well-positioned to lead the Korean e-commerce market, with significant platform opportunities ahead given its data, payments and logistics advantage,” Lydia Jett, partner at SoftBank Investment Advisers and a Coupang board member, said in a statement.

With strong technological and mobile adoption, South Korea is one of the biggest and fastest-growing e-commerce markets worldwide.

In January, E-Mart and its parent company Shinsegae announced a plan to use a $940 million investment from private equity firms to expand their online offerings.