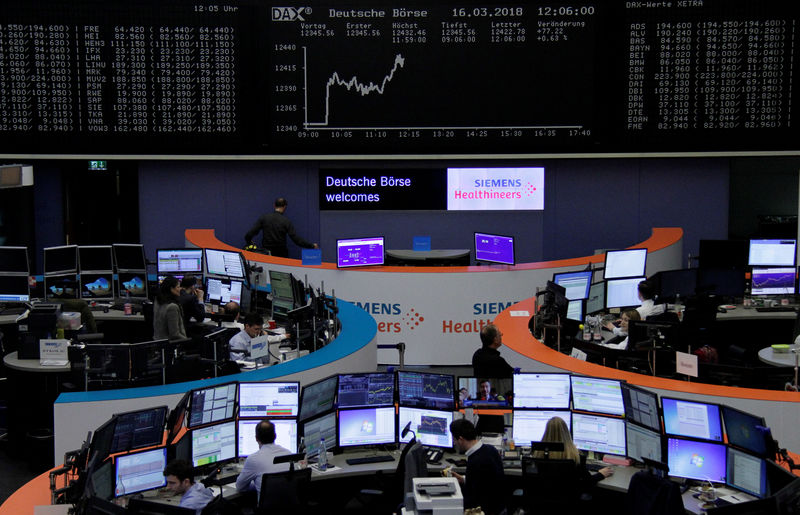 LONDON (Reuters) – Stocks and commodity markets regained some poise on Thursday, having suffered wild tailspins in the previous session as the United States ratcheted up trade war threats on China.

A 2 percent rebound on China’s big bourses () steadied Asian nerves as oil markets clawed back some of Wednesday’s 7 percent slump that had marked their worst day in 2-1/2 years.

Beaten-up industrial metals including and nickel and European stocks pulled higher too in early trade (), while there was some relief for Turkish markets after the lira had been dumped to a record low by interest rate cut talk from its re-elected President Tayyip Erdogan. ()

The dollar meanwhile rose to a six-month high against the Japanese yen after U.S. inflation data that bolstered the case for more Federal Reserve rate hikes this year.

“The basis for this is not entirely clear to me though because it doesn’t seem like this (U.S. threats of another $200 of China trade tariffs) has actually restarted negotiations with China… In fact I would argue that it has made the risk of an accident or an unwanted outcome bigger.”

Europe’s moves were less pronounced than Asia’s had been, perhaps reflecting that caution.

The and blue-chip CSI300 indexes had both ended the day up 2.2 percent. Shares in Japan (), Australia and Hong Kong closed 1.1, 1 and 0.6 percent higher respectively.

The pan-European inched up just 0.2 percent though, with gains in the healthcare and consumer sectors offset by losses in the banking sector and in energy firms after the dramatic drop in oil prices.

Germany’s 10-year bond yield and the euro were both broadly steady with traders awaiting minutes from the most recent European Central Bank meeting. A Reuters report showed its policymakers remain split on when to raise interest rates next year.

“If stocks drop sharply then the Fed will pause and, moreover, we think the U.S. is toward the end of its rate hike cycle,” said Thu Lan Nguyen, an FX analyst at Commerzbank (DE:) in Frankfurt.

Focus was still on what the next steps in the tit-for-tat trade conflict might be. China has accused the United States of bullying and warned it could hit back, although the form of retaliation is not yet clear.

had strengthened 0.3 percent overnight though,, partially recovering from a big slide the previous day after an official currency market level set by the People’s Bank of China was not as weak as some had feared.

“It shows the central bank intends to stabilize the market and calm investors. One-way speculation on the yuan’s depreciation is not in Chinese authorities’ interests,” said Qi Gao, Asia FX strategist at Scotiabank in Singapore.

The against a basket of six major currencies was steady at 94.700 after gaining 0.6 percent overnight.

Against the yen, which usually strengthens in times of political tension and market turmoil, the greenback stretched its overnight rally and rose to 112.385 yen, its highest since January.

Commodity-linked currencies such as the Australian dollar crawled higher having suffered deep losses on Wednesday. The Canadian dollar was also shade higher at C$1.3201 per dollar following a loss of 0.75 percent the previous day.

In commodities there was also stabilization.

futures rose 1.5 percent to $74.52 a barrel after tanking 6.9 percent on Wednesday, after the trade tensions and signs Libya’s oil exports could pick up again, triggered the biggest one-day percentage drop since February 2016.

Metals were recovering from their own 2-4 percent meltdown too. Copper on the London Metal Exchange rose 0.8 percent to $6,194.00 a ton. The industrial metal sank nearly 3 percent on Wednesday, plumbing a one-year low of $6,081.00.