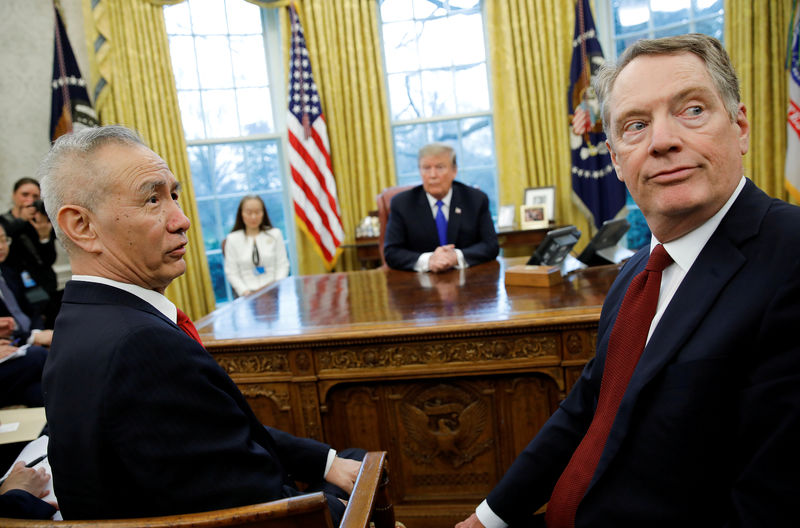 By Jeff Mason and David Lawder

WASHINGTON (Reuters) – President Donald Trump said on Sunday he would delay an increase in U.S. tariffs on Chinese goods thanks to “productive” trade talks and that he and Chinese President Xi Jinping would meet to seal a deal if progress continued.

Trump had planned to raise tariffs to 25 percent from 10 percent on $200 billion worth of Chinese imports into the United States if a deal between the world’s two largest economies were not reached by Friday.

The president said in a tweet that progress had been made on a host of divisive areas including intellectual property protection, technology transfers, agriculture, services and currency.

As a result of what he described as “productive talks,” he said: “I will be delaying the U.S. increase in tariffs now scheduled for March 1. Assuming both sides make additional progress, we will be planning a Summit for President Xi and myself, at Mar-a-Lago, to conclude an agreement. A very good weekend for U.S. & China!”

Mar-a-Lago is the president’s property in Florida, where the two men have met before.

The president did not set a new deadline for the talks and the White House provided no specific details on what kind of progress had been made.

China’s official Xinhua news agency reported that the United States and China had made “substantial progress” on specific issues in the latest round of talks, citing the Chinese delegation to the discussions in Washington.

Trump’s decision to delay U.S. tariff increases was the clearest sign yet that Washington and Beijing are close to a deal that would end a months-long trade war. The threat of tariff increases had represented a large piece of leverage for the Trump team.

Markets, which have been sensitive to the dispute as it has slowed global growth, cheered the move.

U.S. equity index futures opened higher on Sunday evening as trading kicked off for the week. nudged up after Trump’s tweets on trade, and were up about a third of a percent, suggesting Wall Street would open on firmer footing on Monday morning.

The Australian dollar, a liquid proxy for China investments, got a mild lift from the news and further gains were expected for the yuan. MSCI’s broadest index of Asia-Pacific shares outside Japan added 0.14 percent to the highest since October, and is up 10 percent for the year.

Trump said on Friday there was a “good chance” a deal would emerge, and foreshadowed that he might extend the March 1 deadline and move forward with a meeting with Xi.

Treasury Secretary Steven Mnuchin indicated then that if progress continued, a meeting between the two presidents could happen in March.

Last week’s round extended into the weekend, with U.S. and Chinese negotiators discussing the thorny issue of how to enforce a potential trade deal on Sunday, according to a person familiar with the talks. Tariffs and commodities were also on Sunday’s agenda, he said.

Negotiators have been seeking to iron out differences on changes to China’s treatment of state-owned enterprises, subsidies, forced technology transfers and cyber theft.

Agreeing on an enforcement mechanism has proven to be difficult. Washington wants a strong mechanism to ensure that Chinese reform commitments are followed through to completion, while Beijing insisted on what it called a “fair and objective” process. Another source briefed on the talks said that enforcement remained a major sticking point as of Saturday.

Reuters reported on Wednesday that both sides were drafting memorandums of understanding (MOUs) on cyber theft, intellectual property rights, services, agriculture and non-tariff barriers to trade, including subsidies.

Trump said he did not like MOUs because they are short-term, and he wanted a long-term deal. That sparked a back-and-forth with Lighthizer, who argued that MOUs were binding contracts, before saying they would abandon the term altogether going forward.