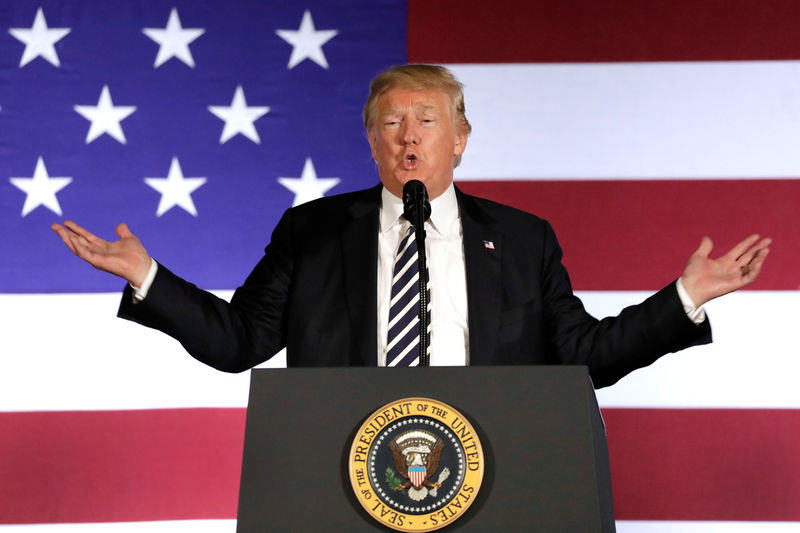 By Makini Brice and David Shepardson

WASHINGTON (Reuters) – U.S. President Donald Trump blasted CNN and NBC News yet again in a tweet on Tuesday, criticizing NBC’s handling of a story on movie producer Harvey Weinstein and suggesting a “look at their license,” without specifying what exactly he was calling for.

Trump has frequently criticized the U.S. news media for what he has said is unfair coverage of him.

“I have long criticized NBC and their journalistic standards-worse than even CNN. Look at their license?” he wrote in the tweet, which cited the outlet’s coverage of Weinstein.

Ronan Farrow, a reporter, has said NBC News blocked him from working on a story about Weinstein, who is facing criminal rape and sexual assault charges and a civil lawsuit for sex trafficking. A former NBC producer corroborated Farrow’s allegations.

Farrow later published the story in the New Yorker magazine. NBC News has defended its handling of the story. Weinstein has denied ever having nonconsensual sex.

Comcast Corp (NASDAQ:), which owns NBC News, declined to comment. Following the tweet, a decline in the price of Comcast shares on the Nasdaq extended slightly.

The U.S. Federal Communications Commission did not immediately comment on the tweet, but in October the FCC’s chairman said the agency does not have authority to revoke broadcast licenses over editorial decisions.

Late on Tuesday, Trump tweeted that Chuck Todd, the host of “Meet the Press,” a news show on NBC, suggested that it was “time for the press to stop complaining and to start fighting back.”

“Actually Chuck, they’ve been doing that from the day I announced for President. They’ve gone all out, and I WON, and now they’re going CRAZY!,” Trump said on Twitter.

Trump blasted NBC and other TV networks last October, calling their news “Fake” and suggesting he would “challenge” their licenses.

Democratic FCC Commissioner Jessica Rosenworcel responded to Trump’s most recent tweet by posting the FCC rules on licensing. “One more time…this is not how it works,” she wrote on Twitter.

The FCC, an independent agency, does not issue licenses to individual networks but to local stations, including those directly owned by broadcasters such as Comcast through NBC.

The agency has said the First Amendment of the U.S. Constitution “expressly prohibits the commission from censoring broadcast matter” and that its role “in overseeing program content is very limited.”