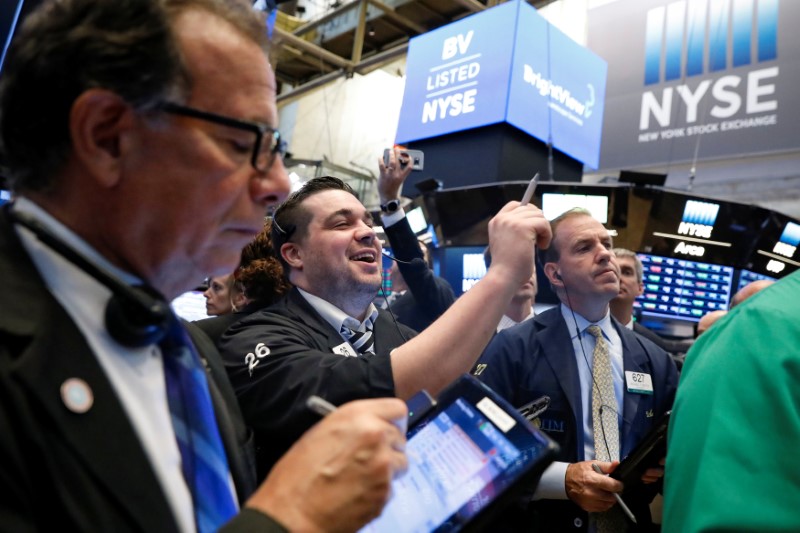 © Reuters. Traders work on the floor of the NYSE in New York

(Reuters) – U.S. stocks jumped on Friday, boosted by a surge in Nike (NYSE:) on its strong earnings report and as banking stocks soared after clearing the Federal Reserve’s stress test.

Nike’s shares surged as much as 11.5 percent to a record high after the world’s largest shoe maker returned to growth in North America last quarter and gave an upbeat forecast for the year.

The gains in Goldman Sachs (NYSE:) and Morgan Stanley (NYSE:) were lower as they cleared the test with conditions.

After a slight wobble on a report that President Donald Trump has said he wanted the United States to withdraw from the World Trade Organization, the markets regained their footing after Treasury Secretary Steven Mnuchin told Fox Business Network that the Axios report was wrong.

“The markets are very much subject to headlines on trade and tariffs,” said Peter Cecchini, chief market strategist at Cantor Fitzgerald in New York.

“They are important from the standpoint that trade globalization has been the cornerstone for growth and when you do something to sort of undermine that cornerstone, that’s a reasonable reason for concern.”

Seven of the 11 major S&P sectors were higher, with the energy index up 1.55 percent as oil prices rose, while the consumer discretionary sector also rose more than 1 percent, boosted by Nike.